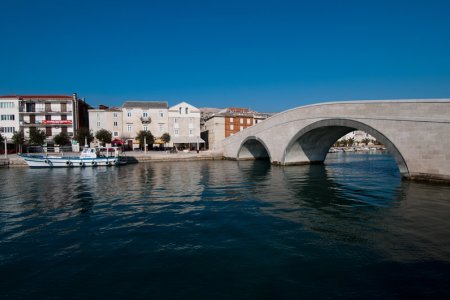 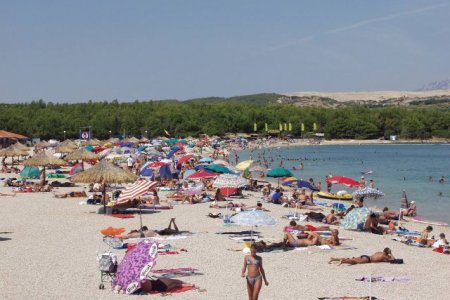 The island of Pag is the fifth area the largest island in the Adriatic Sea, but the long coastline of 302.47 km, most developed island in the Adriatic (indentation coefficient 4.5). Island is known for its poor coverage of vegetation, some of its parts, which are often compared to the lunar surface. Rocky landscape with only stalks of aromatic herbs that graze sheep creates a unique impression. Because the position of the island under the Velebit from which the year (especially in winter), a strong wind blowing, the island of Pag is almost all covered with salt from the Velebit channel..

Uniqueness and attractiveness of the island are numerous sources of drinking water, and numerous springs and the sea. The water generally comes to the island below the seabed with towering hillside. On the island there are three freshwater wetland lakes Big and Small Kolansko mud and dirt. Although the climate on the island include the Mediterranean, close to Velebit makes her so much influence on the vegetation of the island by the eastern part of the island due to strong winds and heavy salt completely naked. Pag Island as the largest kingdom of rocky ground on the Adriatic, where thin grass, low aromatic herb cover, sage and immortelle. These aromatic plants is essential in the diet of sheep on the island's rocky, and giving a special taste of the famous cheese. Also on the island to maintain the native bush and evergreen nature, oak, holm oak, Aleppo pine .... The land below the shallow  [pag 02] bay of Pag hides yet another natural wealth, tested and proven medicinal mud.

Residents of the island engaged in viticulture, olive growing, fruit growing, fishery, animal husbandry and agriculture, which is significant in spite of the rocky surface of the island for centuries had a major impact on the lives of islanders and all thanks to the fertile land of sandy soil. 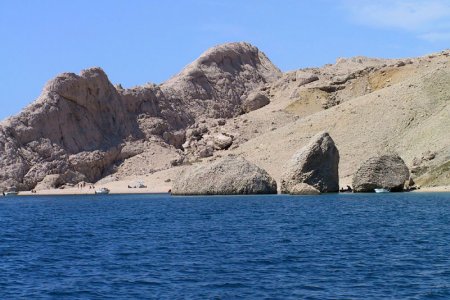 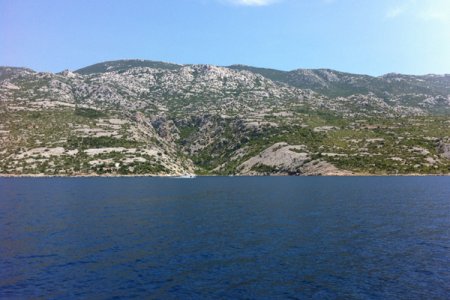 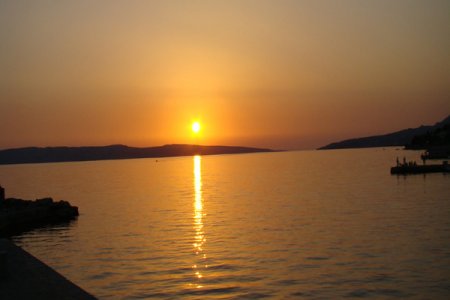 Do you want a short boat ride? This is a trip for you! We offer you ashort boat ride MaDi - two hours by boat from the island of Pag Karlobag and back. Enjoy the sun, the sea, with a welcome drink anda beautiful panorama of the Velebit canal and mountain and seablend. There may be a shorter drive from some app. hour in which we visit small fishing villages, fishing boat and Cesarica. Panoramic touris an excellent form of dating surroundings Karlobag and uniqueness and beauty of the island of Pag with beautiful natural beaches andcoves where you can freshen up.

Be sure to consider the scenic ride as you will not remain indifferent to the natural beauty and clear waters of the Velebit channel. 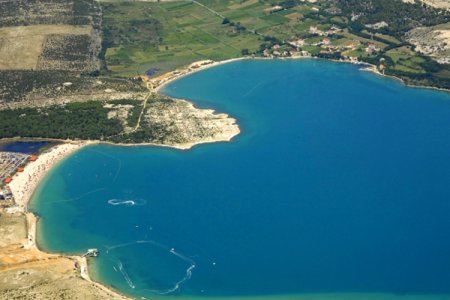 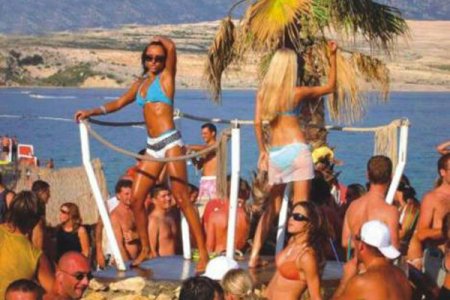 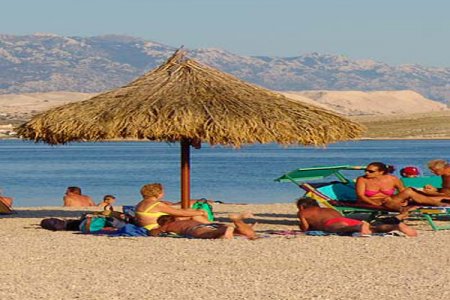 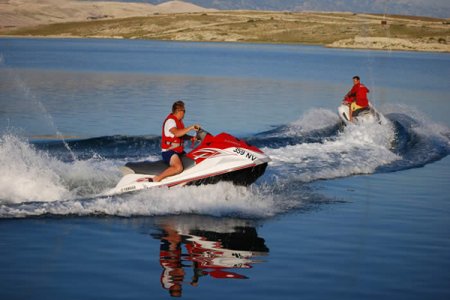 In the northeastern part of the island, near the town of Novalja, is a popular beach Zrce. The beach is sandy with areas for non-swimmers, children and persons with disabilities. You can rent boats, jet-ski, beach chairs and umbrellas. On the beach manyrestaurants, a waterslide and volleyball courts, and there are also lifeguards. The Aquarius offers a wide selection of dishes and drinks in an interesting environment with tables in the pool.

The beach is popular among young people due to the excellententertainment in clubs throughout the day attracted loud music anddance rhythms. The party continued until the early morning hours ofexcellent entertainment in an attractive clubs.

Zrće Beach is located southeast of Novalja and a special story. It is the fairest and most attractive beaches of Novalja. Its costal gravelsurface on which the peak season can fit thousands of bathers. Sea entrance is gravel, and the steep descent of the seabed beach isvery deep. On the beach are various sports and recreational andentertainment facilities and quality restaurants, a few attractivelylandscaped buildings provides an opportunity for fun throughout the night. The action of the Croatian National Tourist Board and the Media "Blue Flower", Zrce declared the tidiest and most beautifulbeaches on the Adriatic in 2002. year. With its outstanding natural features, equipment and facilities, Zrce meets the strict criteria of the European Foundation for Education and Care for the environment and by summer 2003. The flag is blue. The beach is far away from Novalja about 2 km, has a big parking lot. 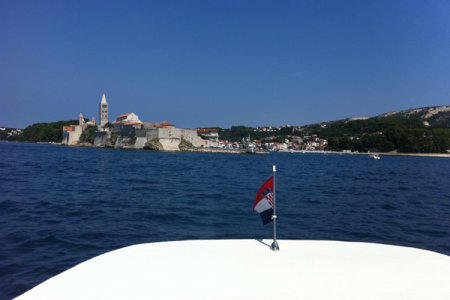 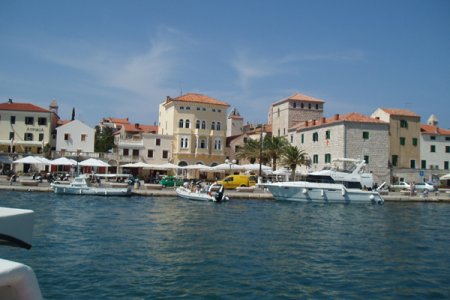 The island of Rab is situated in the Kvarner group of islands between 44 ° 41 'and 44 ° 51' north latitude and 14 ° 40 'and 14 ° 53' east longitude from Geenwicha. The town of Rab covers an area of ​​102.85 km2 archipelago (2.86% of total area Kvarner County) and 424.52 km2 in the waters of the Kvarner Bay. The island of Rab extends northwest to southeast, greater than 22 km from the Cape to the northwest cape to cape hub in the southeast. Maximum width is 11 km.Velebitski channel separates the island from the mainland, and the nearest land is in the extreme southeastern tip, and 1800 m from the island to the south is divided by a channel Pasko closely, to the west towards the islands of Cres and Losinj is Kvarnerić and from the island to the northwest gate Senjska share it. The island of Rab we find great differences. Najoskudniji vegetation and the north-eastern slopes of the peaks Kamenjak chain, which just rocks.The southwestern part of the island is something else, here a little grass, Cush, immortelle, milkweed, asparagus, white grapes, blueberries, white hawthorn, and after afforestation is very nicely developed several smaller complexes of pine and oak.

The greenest part of the island is an area Kalifront that the entire forest. This region is one of the most beautiful on the Mediteranean.In addition to oaks commonly encountered sage, pine and uljiku.Often we find here smilax, ivy, various ferns, and after the rain there are many different types of mushrooms. The forest in the central part of Kalifront is known as Uncle and is under special protection as a nature reserve, except where these species grow and hundreds of cork oak trees, what is a rarity on the Adriatic.

In the middle of the island manages most plant species. A large part of the land in this area has been turned into fertile fields, gardens, vineyards, orchards and olive groves, and on that part of the unimproved except uljike growing elm and oak, myrtle, ferns, various grasses, blackberries, juniper, spruce, and blossoming bushes of broom gives the Spring this a beautiful picture of the are 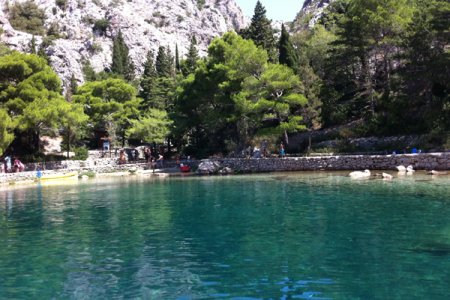 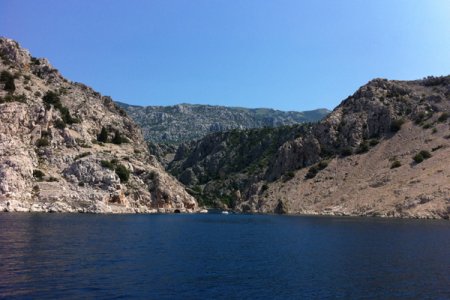 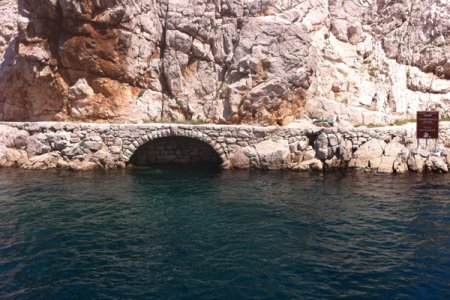 Zavratnica is without doubt one of the most beautiful coves of the Croatian Adriatic coast. It is located about 20 minutes of easy walking trail that leads along the coast south of the ferry dock (Island of Rab) in Jablanac. So it may come from the village Zavratnica go down the path to the lookout point of the bay. Many hikers and tourists in summer is visited by boat. Because of the beauty of the landscape and natural values ​​(geomorphology, flora ...) released in 1964. under special protection in the category of protected landscape. Since 1981. integral part of the Nature Park "Velebit". "Near Jablanac under Velebit, hid one of the jewels of the Croatian Adriatic: Bay Zavratnica. seems to be a fraction of the Norwegian coast in Croatia stray, but not a fraction of the green and shady northern coast, but sunny, bright, carved in stone surom coast.

Zavratnica only shape resembles a fjord, its genesis is quite different. There has never been glaciers, but instead floods brazdale slopes of Velebit. One such show of the torrent channel postglacial sea level and flooded by the Krishna created Zavratnica. length of the bay is about 1 kilometer, and the width ranges from 50 to 100 meters. high steep scree slopes down to the limestone debris to the shore. construction of terraces and planting trees, these sandbanks in the most calm and subdued, and now without Zavratnica difficulties can be visited every visitor. Who wants more beauty, a little effort and climb because Zavratnica bird's eye offers a unique panorama of sea and stone. " That's about Zavratnica description from the book "Croatian Natural Heritage" (4th edition, 1988.), In which this bay has been included as a "significant landscape".

"According to legend, the 615th was a great earthquake occurred in this area and then in one night, sank three old Roman city. first was called Ortopla, the site of the village Stinica (about 5 km west of Jablanac, Op. s). This is evidenced by the remains of a Roman cemetery and officers mint. second Cissa (today Caska general. ed) on the island of Pag. The findings show that there was a bishopric. third major city was in St. George (east of Senja, Op. ed.) and was called Lopsica. When the earthquake occurred and then submerge these cities, according to legend created the Zavratnica."